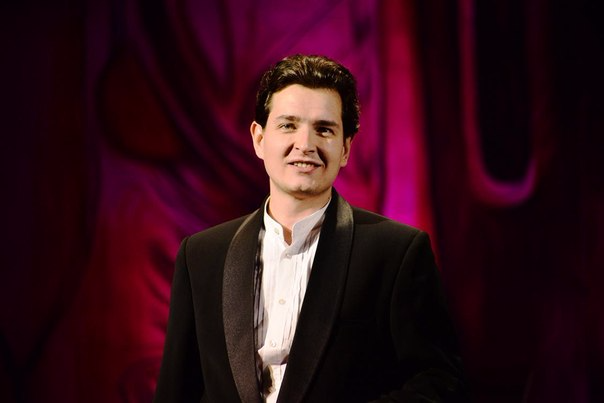 Born on January 24, 1988, in the city of Kerch (Crimea). In 2004 he graduated from the Kharkiv Lyatoshynsky Music School (specialization on music theory). In 2011 he graduated from the vocal faculty (as a lyric baritone) of the Tchaikovsky National Music Academy of Ukraine (class of Professor Buymister).

Yet being a student he performed opera parts: Evgeniy Onegin and Rotny ("Evgeniy Onegin" by Tchaikovsky), Robert ("Iolanta" by Tchaikovsky), Escamillo ("Carmen" by Bizet), Aleko ("Aleko" Rachmaninoff) , Tobias Mill ("Marriage Bill" by Rossini).
Since 2008, he has been a soloist of the Kyiv National Operetta Theatre. As the theater singer he performes leading parts in many productions: Edwin ("Silva" by Kalman), Raul ("Violet of Montmartre" by Kalman), Mister X ("Circus Princess" by Kalman), Count Danilo ("The Merry Widow" by Legar), Prince Orlovsky ("Die Fledermaus" by Strauss), Gryts ("Sorochyntsi Fair" by Ryabov), Hortensio ("Kiss me, Kate!" by Porter).

In 2011, after participating in the Operalia Placido Domingo International Competition of Vocalists (semifinal), he finally switched to tenor repertoire on the recommendation of Placido Domingo. Since that year he has been a soloist-trainee of the National Opera of Ukraine. His repertoire includes parts: Duke ("Rigoletto" by Verdi), Rudolf ("La Boheme" by Puccini), Lenskiy and Tricke ("Evgeniy Onegin" by Tchaikovsky), Alfredo ("La Traviata" by Verdi), Young Gypsy ("Aleko" by Rachmaninoff), Petro ("Natalka Poltavka" by Lysenko), Andriy ("Cossack beyond the Danube" by Gulak-Artemovsky) and others. He also appeared as a tenor (Uriel) in Haydn’s Oratorio "The Creation" and in Beethoven’s Ninth Symphony.
Since 2012, has been a soloist of the National Philharmonic of Ukraine.
He toured in Germany, Switzerland, Poland, Romania with Donetsk Solovianenko National Academic Opera and Ballet Theatre and with National Academic Operetta Theatre.