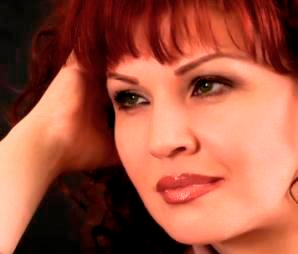 Born on September 23, 1970 in town Rivne. In 1984 she joined the Rivne College of Music, entering the Conductor-Choral Department, and in 1986 she transfered to study at Lviv College of Music at Department of Solo Singing (class of teacher Anatoliy Hrom, and graduated from it in 1989. During 1994-1999, she studied at the Tchaikovsky Kiev State Conservatory (class of Professor Larysa Ostapenko).

Since 1999, has been working for the National Philharmonic of Ukraine as soloist vocalist.

In 2005 became the winner of the International Competition "Art of XXI century".

Repeatedly performed in author concerts of O. Bilash, participated in the O. Bilash Festival "Two Colors", as well as in memorial concerts dedicated to composers Platon Mayboroda and Mykola Lysenko.
She has performed with the National Symphony Orchestra of Ukraine, the Symphony Orchestra of the National Philharmonic of Ukraine, National Academic Orchestra of Folk Instruments of Ukraine, Academic Orchestra of Folk and Popular Music of the National Radio Company of Ukraine under the direction of conductors Volodymyr Sirenko, Mykola Dyadyura, Victor Hutsalo, Svyatoslav Lytvynenko.
In the Lysenko Concert Hall of the National Philharmonic of Ukraine three recitals of the singer were held. She was accompanied by the National Academic Symphonic Band of Ukraine (conductors O.Roshchak and O.Bazhenov). Other two solo concerts there were accompanied by the Ensemble "Dyvohray" (director Vadym Chornokondratenko). She also sang Naina part in the concert-performance of opera "Ruslan and Lyudmyla" by Glinka (2002).

Ruslana Have participated repeatedly in programs of Ukrainian Radio and Television, performed at charity concerts.