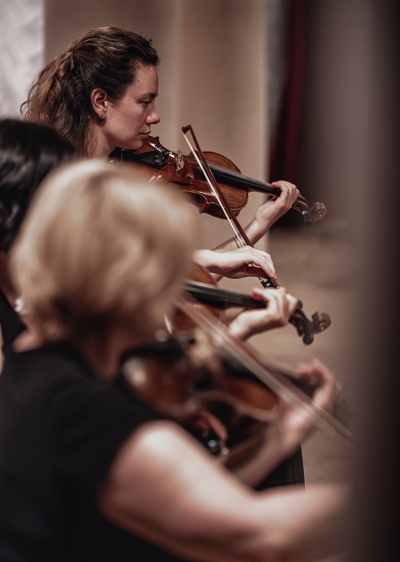 
The National Philharmonic of Ukraine is coming out of quarantine. Waiting for the opening of the new concert season, the traditional “Summer Music Rays Festival will take place from August 6 to 26t!

10 concerts are scheduled in the Festival with unsurpassed performers and programs composed by exquisite classical works of the XVIII, XIX and XX centuries.

Come to the Lysenko Hall of Columns and enjoy summer by adding "Summer Music Rays" to your own August evenings!


On August 6, the opening day of the Summer Music Rays Festival, instrumental version of the most popular fragments from operas by Italian and French composers of the 19th and early 20th centuries will be performed by the National Ensemble of Soloists "Kyiv Camerata" under the direction of Oleg Marynchenko. Give yourself an enjoyable evening with your favorite opera tunes!
Tickets here: https://bit.ly/3gxgECF

On August 10, the National Chamber Ensemble "Kyiv Soloists" under batoon of Igor Puchkov will present a concert entitled "Idyll". This is the name of the work for string orchestra of the Czech composer Leoš Janaček. The concert program will be complemented by works of classical composers of the XIX and XX centuries, in which the authors reflect the beauty of life.
Tickets here: https://bit.ly/31PJRVk


On August 11, the Big Band of the National Academic Symphony Band of Ukraine under the direction of Oleksiy Vikulov will present jazz hits. In addition to Clara's most popular lullaby from George Gershwin's Porgy and Bess, you will hear the most popular jazz melodies of the 20th century. Enjoy summer listening to exquisite jazz!
Tickets here: https://bit.ly/3f5W5NF


On August 12, the Kyiv Chamber Orchestra will present serenades. In particular, there will be a "Serenade for String Orchestra" by Peter Tchaikovsky, which is no less popular than "Little Night Serenade" by Wolfgang Amadeus Mozart. "Mozart's" sense of form, lightness and transparency of texture are clearly manifested in the work of Tchaikovsky. This concert will create a lyrical atmosphere and give incredible emotions!
Tickets here: https://bit.ly/3gyeB1d


On August 13, one of the brightest representatives of the guitar school of Ukraine, Honored Artist of Ukraine Andriy Ostapenko will perform a recital called "Guitar Nights". In the program of the recital popular works by classical composers, who were also legendary performers, will be perfromed. Treat yourself to a pleasant evening with guitar music!
Tickets here: https://bit.ly/2VSTXRv


The second concert of the series "Kyiv Camerata Invites" will take place on August 17. This time under the direction of Oksana Nikitiuk, this ensemble will present the music of Austrian classical composers of the XVIII and XIX centuries, in particular Josef Haydn, Wolfgang Amadeus Mozart and Franz Schubert. Enjoy exquisite classics only in unsurpassed performance!
Tickets here: https://bit.ly/2DhXXEU


On August 18, the Big Band of the National Academic Symphony Band of Ukraine under batoon of Oleksiy Vikulov will present an evening of music by Glenn Miller, which will recreate the atmosphere of American jazz of the 1930s and 1940s. Treat yourself to an evening of jazz compositions from the repertoire of the legendary Glenn Miller Orchestra!
Tickets here: https://bit.ly/2C8YFUv


On August 19, the Kyiv Chamber Orchestra will present a concert entitled “The Seasons”. Antonio Vivaldi’s “The Four Seasons” as well as popular “Four Seasons of Buenos Aires” by Astor Piazzolla will be performed. The musical seasons certainly find a resonance in the hearts of listeners, because a person constantly thinks about life and death, about the meaning of existence. This is the philosophical implication of this topic. Enjoy life while listening to the magic of live music!
Tickets here: https://bit.ly/2ZIkXEB


On August 25, the Big Band of the National Academic Symphony Band of Ukraine under the direction of Oleksiy Vikulov will delight the listeners with a program with works of Duke Ellington. We hope that jazz compositions from the repertoire of the legendary orchestra of Duke Ellington will give you incredible emotions and create the atmosphere of a real holiday!
Tickets here: https://bit.ly/3e6uKJF


On August 26, at the closing concert of the Summer Music Rays Festival, the Kyiv Chamber Orchestra will present a concert called “Company”. This is the name of the work for string orchestra of modern American composer Philip Glass. Samuel Beckett, which premiered in 1983 in New York. The concert “Company” is a project of violinist Vadym Borysov. Enjoy the magic of live music!   Tickets here: https://bit.ly/2Z42yCT
Фестиваль «Літні музичні промені»